1. THE DIVISION OF THE ROMAN EMPIRE

He expanded the Roman Empire to its greatest territorial extent: from the British Isles and the rivers Rhine and Danube in Europe to the river Tigris in Asia and the Sahara Desert in Africa

In 395 he divided the Empire into two parts:

- The Western Roman Empire, with the capital in Rome.

- The Eastern Roman Empire, with the capital in Constantinople.

After his death, his sons, Arcadius and Honorius inherited the East and Western halves respectively. Empire was never again re-united. 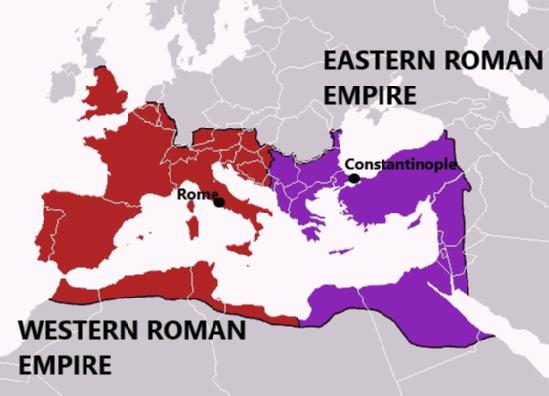 2. THE EASTERN AND WESTERN ROMAN EMPIRE

Lasted until 1453 with the name of Byzantine Empire.

This is the end of the Roman Empire and of ancient history, and the beginning of the Middle Ages, that lasted till the fall of Constantinople to the Turks (1453) or the discovery of America (1492).

After 476 AD various Germanic kingdoms had settled in the territories of the former Roman Empire.

The most important kingdoms and kings were: 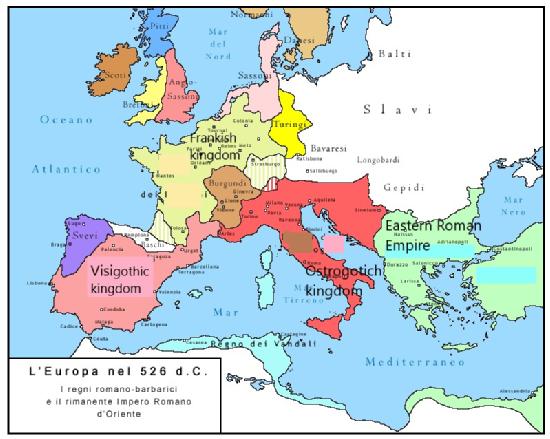 In the seventh century, the Muslims, followers of this religion, conquered a number of territories that had been part of the eastern and Western Roman Empire

Three civilizations shared the territories of the former Roman Empire: