Physics is present in all our daily activities, it's part of all those natural events and human inventions that have helped to achieve significant levels of technological progress. From simple movement of a lever to sophisticated operations executed by a machine, physics has enabled man to improve their living conditions through complex processes that leverage knowledge of modern physics to facilitate the development of products needed to humanity. 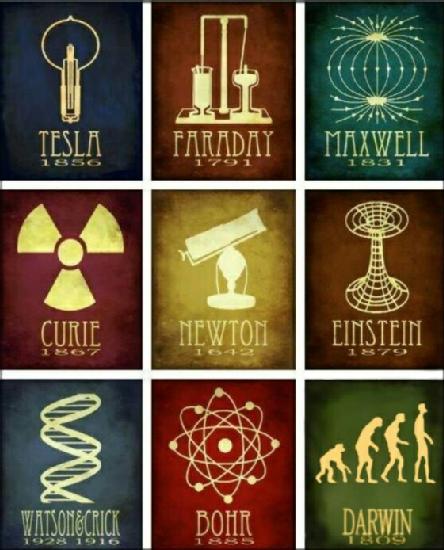 Physics has allowed us to go to the moon, place satellites in orbit, to improve the performance of the cars, know ahead of hurricane formation and overall the weather helps us to manufacture appliances to facilitate housework , build ships, aircraft, heavy machinery and generally all devices that man has made his service in the industry.

Numerous achievements of our civilization indicate the significance of which will penetrate throughout this site: electricity, gasoline engines or diesel, steam engines, nuclear reactors ... are all products of physics, whose study is very interesting and exciting. A complete understanding and intelligence we must struggle.

Physics ( Greek φύσισ ( physis ) , "nature") is now understood as the science of nature or material phenomena . Study the properties of matter , energy , time , space and their interactions.

Since ancient times people have tried to understand the nature and phenomena observed therein : the passing of the seasons , the movement of bodies and of the stars, etc. . The first explanation is based on philosophical considerations and without performing experimental verifications , this concept exist back then. Therefore some " false " as the interpretations made ​​by Ptolemy - " The Earth is at the center of the universe revolve around it and the stars " - they lasted hundreds of years.

In the sixteenth century, Galileo pioneered the use of experience to validate theories of physics. He became interested in the movement of the stars and bodies . Using tools such as the inclined plane , discovered the law of inertia dynamics , and the use of one of the first telescopes observed that Jupiter had satellites spinning around and sunspots. These observations demonstrated the heliocentric model of Copernicus and the fact that the heavenly bodies are not perfect and immutable . At the same time , the observations of Tycho Brahe and Johannes Kepler calculations allowed to establish laws governing the motion of the planets in the Solar System .

In 1687 Newton published The Mathematical Principles of Nature (Philosophiae Naturalis Principia Mathematica), a work in which the classical laws of dynamics describes known as Newton's Laws; and the law of universal gravitation Newton. The first group of laws helps to explain the dynamics of bodies and make predictions of the movement and balance of body , the second law permitted prove Kepler's laws of planetary motion and explain the Earth's gravity (hence the name of universal gravity) . At this time it became clear one of the basic principles of physics , the laws of physics are the same anywhere in the universe. The development by Newton and Leibniz mathematical calculation provided the mathematical tools for the development of physics as a science able to make predictions. At this time developed their physical labor as Robert Hooke and Christian Huygens will study the basic properties of matter and light . Then the English scientists William Wurts and Charles Demiano deepened the study of the causes of Newton's laws , ie gravity.

Physics in the sixteenth and seventeenth

In the sixteenth century were born some characters like Copernicus, Stevin , Cardano , Gilbert, Brahe , but until the early seventeenth century Galileo promoted the systematic use of experimental verification and the mathematical formulation of physical laws . Galileo discovered the law of falling bodies and pendulum , it can be considered as the creator of mechanics, also made the basis of hydrodynamics , the study was continued by his pupil Torricelli who invented the barometer, the instrument Pascal later used to determine the atmospheric pressure . Pascal said the concept of pressure within a liquid and enunciated the theorem transmission pressures . Boyle made ​​the law of compression of gases ( Boyle's law ) .

In optics , Renato (René ) Descartes established the law of refraction of light, formulated a theory of the rainbow and studied spherical mirrors and lenses. Fermat enunciated the principle of geometrical optics that bears his name , and Huygens , who will also be important contributions to mechanics , discovered the polarization of light , as opposed to Newton, for whom light is corpuscular radiation , proposed the wave theory of light. Hooke studied the colored stripes that form when light passes through a thin sheet ; also established the proportionality.

In the late seventeenth century physics begins to influence technological development in turn allowing more rapid progress of physics itself.

The instrumental development ( telescopes , microscopes and other instruments) and the development of increasingly sophisticated experiments allowed to obtain great successes as a measure of the mass of the Earth in the experiment of the torsion balance .

The first scientific societies such as the Royal Society in London in 1660 and the Académie des Sciences in Paris in 1666 as communication and scientific exchange , taking in the early stages of both companies prominently displayed the physical sciences also.

From the eighteenth century Boyle and Young developed thermodynamics. In 1733 Bernoulli used statistical arguments with classical mechanics to extract results of thermodynamics, statistical mechanics starting . In 1798 Thompson demonstrated the conversion of mechanical work into heat and Joule in 1847 formulated the law of conservation of energy .

In the field of optics the eighteenth century began with the corpuscular theory of light Newton exposed in his famous work Opticks . Although the basic laws of geometrical optics had been discovered a few decades ago , the eighteenth century was good at technical advances in this field produced the first achromatic lenses , first measured the speed of light and discovering the spectral nature of light . The century ended with the famous Young experiment in 1801 which highlighted the interference of light demonstrating the wave nature of it.

Physical investigation of the first half of the nineteenth century was dominated by the study of the phenomena of electricity and magnetism. Coulomb , Luigi Galvani , Faraday , Ohm , and many other famous physicists studied the disparate and counterintuitive phenomena that are associated with this field. In 1855, Maxwell unified the known laws of the behavior of electricity and magnetism into a single theory with a common mathematical framework showing the united nature of electromagnetism . Maxwell 's work in electromagnetism are often considered comparable to the discoveries of Newton's universal gravitation and summarized with known , Maxwell's equations, a set of four equations able to predict and explain all classical electromagnetic phenomena . One of the predictions of this theory was that light is an electromagnetic wave. This discovery of Maxwell provides the opportunity for the development of the radio a few decades later by Heinrich Hertz in 1888.

In 1895 Roentgen discovered X-rays , electromagnetic waves of very high frequencies. Almost simultaneously, Henri Becquerel discovered radioactivity in 1896. This field is rapidly developed with the later works of Pierre Curie , Marie Curie and many others , ushering in the nuclear and the beginning of the microscopic structure of matter physics.

In 1897 Thomson discovered the electron , the elementary particle that carries electrical current in circuits proposed in 1904 a first simplified model of the atom .

The twentieth century was marked by the development of physics as a science capable of promoting technological development. Earlier this century physicists have considered an almost complete view of nature . But soon there were two great conceptual revolutions draft: The development of the theory of relativity and the beginning of quantum mechanics .

In 1905 Albert Einstein formulated the theory of special relativity, in which space and time are unified into a single entity , spacetime . Relativity asks different transformation equations of motion when viewed from different inertial those given by reference to classical mechanics . Both theories coincide small speeds relative to the speed of light . In 1915 extended the special theory of relativity to explain gravity by formulating the general theory of relativity , which replaces the law of gravitation Newton.

In 1911 Rutherford deduced the existence of a positively charged atomic nucleus from scattering particles experiences . A positively charged components of the kernel are called proton . Neutrons , which are also part of the core but have no electrical charge, Chadwick discovered in 1932.

In the early twentieth century Planck , Einstein , Bohr and others developed quantum theory to explain anomalous experimental results on radiation of bodies. In this theory, the possible energy levels become discrete . In 1925 Heisenberg and Schrödinger and Dirac in 1926 formulated quantum mechanics , which explained the preceding quantum theories . In quantum mechanics , the results of physical measurements are probabilistic ; quantum theory describes the calculation of these probabilities .

Quantum mechanics provided for theoretical condensed matter physics , which studies the behavior of solids and liquids, including phenomena such as crystal structure , semi-conductivity and superconductivity tools . Among the pioneers of condensed matter physics include Bloch , who developed a mechano - quantum behavior of electrons in the crystal structures (1928 ) description.

Quantum field theory was formulated to extend quantum mechanics consistent with the special theory of relativity. It reached its modern form in the late 1940s through the work of Feynman, Schwinger , Tomonaga and Dyson. They formulated the theory of quantum electrodynamics , which describes the electromagnetic interaction. Quantum field theory provided the basis for the development of particle physics, which studies fundamental forces and elementary particles . In 1954 Yang and Mills developed the basis of the standard model .

Physics of the XXI century

Physics continues to face major challenges , both practical and theoretical , in the early twenty-first century. The study of complex systems dominated by systems of nonlinear equations , such as weather or the quantum properties of the materials have enabled the development of new materials with surprising properties . A theoretical astrophysics provides a worldview with many open questions on all fronts , from cosmology to planetary formation . Theoretical physics continues his attempts to find a physical theory capable of unifying all the forces in a single formalism in what would be a theory of everything . Among the theories candidates must quote superstring theory .