One of the best sci-fi movies ever made

Star Wars Episode IV: A new hope was the first movie in the Star Wars universe to be released. It was directed by George Lucas and released in 1977. Its genre is science – fiction. In the cast there are really great actors, like Alec Guinnes, Mark Hamill, Harrison Ford or Carrie Fisher, who perform as Obi-Wan Kenobi, Luke Skywalker, Han Solo and Princess Leia Organa respectively. The rating of this film is 4,8 out of 5 stars, which says that is really good. This film was the first sci-fi film to be nominated for the Oscar for the Best Film. 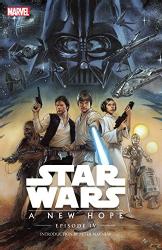 At the beginning of the movie, Darth Vader, the main villain, captures Princess Leia, who has given the Death Star blueprints, essential to destroy the Death Star, to C-3PO and R2-D2, her droids. After that, the droids escape to a deserted planet named Tatooine, where they are kidnapped by the jawas (junkman aliens). The jawas sell them to Luke Skywalker, a young boy who lives in the desert with his uncles. In his house, R2-D2 shows Luke Leia’s help message. Luke goes to show the message to Ben Kenobi, whose real name is Obi-Wan Kenobi. He was a Jedi knight, but he had to hide when the Empire appeared. After showing him the message, the droids, Luke and Obi-Wan meet Han Solo and Chewbacca, who will help them to rescue Leia and fight the Galactic Empire.

In my opinion, this is one of the best Star Wars movies, and it is as old as good. The special effects are amazing, the plot is really interesting, and there are some twists. The casting is so good! both main and minor characters act really well. There are experienced actors, like Alec Guiness or Peter Cushing, and actors who debuted in this film, like Harrison Ford or Mark Hamill. The soundtrack is wonderful, it was made by John Williams, one of the best composers of our time. Grand part of the setting was made with especial effects.  I really recommend this film because I love it and I’m sure that people will do it too.