AGES AND SOURCES OF PREHISTORY.
Time and the science of history.
History: the science that studies humanity's past.

History studies all the aspects of human life:

Division of history.
To facilitate its study, we divided History into periods of variable lengths, separated by key events. The most important are:

-Prehistory is divided into two ages:

-History is divided into four ages:

The division of prehistory.
Prehistory is the period of time from the apparition of the first human beings (4,4 million years) to the invention of writing (3.250 B.C). We can divide it into two ages:

The sources for prehistory.
In order to the study prehistory our sources are:

Most of this remains are buried, because of that is necessary to carry out archeological excavations.

An archaelogical excavation is a slow and expensive digging to recover remains buried underground.

It is composed of several stages:

The problem of our origin.
Until modern times was though that human beings has appeared over this planet in the current form.
In the XIX century, the theory of the evolution was developed by Charles Darwin. According to it, human beigns evolved from primates, a type of mammals which appeared 65 million years ago.
Five million years ago, primates started to evolve into two different direcctions:

Hominisation process.
There were three biological changes that made hominids different from the rest of the large simians:

Human evolution and its stages.
Definition: hominisation was the long evolutive process trough which the hominids adquired their own unique features.
Chronology: this process took place in Africa between seven and 4 million years ago.
Causes: a climatic change that made the african climate a lot drier. As a consquence big extensions of tropical rainforest were transformed into treeless savannah, and the primates of this zones were forced to leave the trees and descend to the ground in order to look for new food sources.
We can distinguish several stages in this process:

Palaeolithic is the first period of the Prehistory that started 4. 4. million years ago and ended 10.000 years B. C.

Paleolitic people lived in a wide variety of enviorments (torrid climates, frigid), life was very difficult and human beings had to use most of their time to find food or reefuge. The main characteristics of their way of life were:

Apart from food, from their preys they obtained clothes (fat, tendons and hides) footwear (leather) and bones (tolos). We talk about a predatory economy, because

The main technological advances of the Paleolithic were:

Humans lived in groups of about 20 or 30 people who were linked by family ties (tribes). It is thought that some members of the group had a greater importance:

Today is believed that there were three forms of religious beliefs:

There were two main forms of art during the Paleolithic period:

Chronology.
The Neolithic period started around 10.000 B. C. and ended about 4.500 B. C. with the apparition of metalworking.

Where and why.
10.000 B.C. ago, the last glaciar period ended with a climatic change and a rise in the atmospheric temperatures. As a consequence, there was less food and paleolithic groups had to find new ways to find food, developing agriculture and livestock farming.

These changes that started the Neolithic period took place in the Fertile Crescent, a half-moon shaped region extending from the rivers Tigris and Euphrates to the Nile. From there spread to Europe, India and China.

Economy.
The main two characteristics of the Neolithic were the apparition of the productive economy and the sedentary way of life. These changes are so important that we call it, the Neolithic Revolution:

New inventions.
The main inventions of the Neolithic period were:

Religious beliefs and art.
The main religious rites were dedicated to:

The most important art form was decorated pottery.

Chronology.
The Metal Age started around 4. 500 BC with the discovery of metallurgy and ended between 3.250 BC and 1.000 BC, according to the date of the invention of writing which supposed the start of history.
Economy.

Finally, once cooled the items were polished. 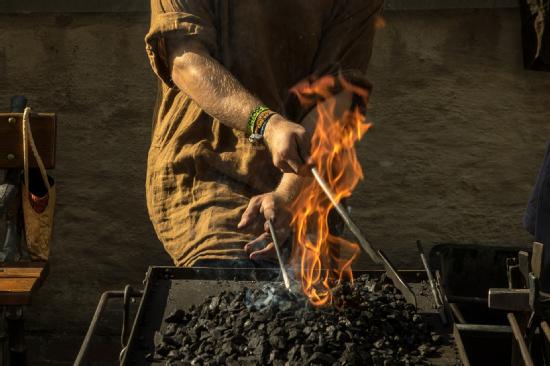 How did Iron Age people live?

Activities about the content Ages and sources of prehistory